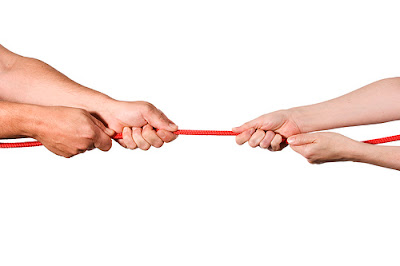 I'd have to admit that I used to be a bit of a control freak (and some of my friends would venture to say that I still am in certain areas of my life).  Over time though, I've learned that yielding to another can result in less stress and more happiness.
For example, before I was married, I lived on my own in a little garage apartment attached to an older woman's home.  I had my set up just right.  I knew how I liked to fold my laundry, where I liked to store away my dishes, and so on.  When I got married, my husband had another whole set of rules he followed.  IF the towels were folded, that was a good thing, who cared if they weren't tri-folded?  IF the dishwasher was loaded, who cared if the plates weren't neatly stacked together and the bowls in the proper place?  WELL I DID!  Then I took a step back and realized:
I learned it was not necessarily important how it was done, as long as it was done.  So I coined the phrase "pick your battles".  It's so true!  There's less arguing and more happy bantering when I don't nit-pick over every little thing.  At the time, we were both working full-time outside the home, so it took teamwork to get things done around the house.  Now that I'm staying at home with the kids, I do find I have lapsed back into my old ways of reorganizing the dishwasher if he has helped load it.  But I don't say anything.  I think back to the time when we were newlyweds and smile.
Now that I have children, I've learned this "pick your battles" thing can work for them too.  If my daughter wants to parade around in a princess dress from sun-up to sun-down for 3 days straight, that's fine...at least she's got clothes on.  If my son wants to play in a mud puddle and splash around in the water, that's fine too...he's washable and so are his clothes.  If my daughter wants to have a ham and cheese sandwich for breakfast instead of cereal or french toast sticks, that's okay...at least she's eating something somewhat nutritious.  However, I do draw the line at candy and sweets before lunchtime.  My daughter will ask for a brownie at 7:30 in the morning.  I'll suggest she have an apple or some grapes if she's still hungry, knowing she already had a bowl of cereal with a banana.  The battle of the wills begin, but a compromise is reached when everyone gets a brownie for dessert after supper.
I hope you learn to pick your battles and enjoy the moments you have with your family.  It works for us.
Do you argue over the little things?
Posted by Candi at 8:15 AM

I completely agree and have said it often, so much so my kids even know about it now.
My daughter likes to color her hair. She does a great job, so I like it, but at first it was like...really????
I decided to choose my battles. If she ever came asking for a belly button ring or tattoo (which she hasn't, and probably won't) the answer was no.
Some things that they like won't hurt anything, let them express themselves if they want.
Trust me it starts when they are little and it's always a question you need to ask yourself.

Candi
I am the mommy to 3 precious children. I'm learning the frugal life through coupons and gardening. I'm sharing recipes I find and concoct using ingredients I get on the cheap. Sometimes I share tidbits from my crazy life as a stay-at-home mommy. I hope you'll pull up a chair and stay awhile... You may contact me via email: sweetdarlin25(at)yahoo(dot)com. I love to hear from all of you, so feel free to comment.